Continuing my series of blogs featuring home educating writers, I'm thrilled to welcome author Sarah Louise Jasmon to my blog today. Sarah is the author of The Summer of Secrets, published in 2015. Sarah lives on a canal boat in Manchester, and she home educated all three of her children. We had a chat about the writing-and-home-education-life... 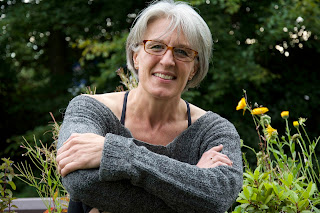 What made you decide to home educate your children?

I first heard something about it on Radio 4 when my first baby was a few months old. I thought it sounded like a great idea, but by the time she was of school age, we'd settled in Eastbourne and just went with the flow of applying to the local infant school. Her first school was lovely, treating them all as individuals, but then she moved to junior school. Not so good. This school had been, for a while, the largest junior school in Europe, with six classes in each year. It felt like a factory, squeezing out identical, uniformed children. After a couple of terms, we decided to travel for a while, so de-registered, and never seriously considered school again (my younger two never went). I can still remember being in France at the end of that first summer, looking at the piles of beautiful, brightly coloured shoes in one particular shop and thinking how the shoe shops in England would be full of regulation black. We bought Fuchsia a pair of pink, striped bowling shoes, laughing at how this meant she couldn't go back to school now, because they wouldn't let her wear her shoes.

Being able to take time to explore and play and follow what each child is interested in at the right pace for them. Plus not having to start the day early. I also really appreciate the fact that we've managed to avoid the worst of peer pressure and the need for the latest whatever item. I think that, as a family, we're closer than most.

And what's the worst thing?

Everyone has days when everything seems to be going wrong, don't they? When you're a home ed mum, though, you can't blame the school or the teacher: it's all down to you. There are times when it's incredibly challenging to hold your nerve and go with what you feel to be the right thing, especially if you have people doubting you. Both my mum and my mother in law have told me that they had times of being really worried by the idea of home ed, but that the evidence of how the kids were thriving made them realise that it was okay, that we were all doing really well.

How and when do you find time to write your books?

I had a realisation when I had very small children that it was okay to put my ambitions to one side for a while, because there would be plenty of time to act on them at a later date. I actually started writing properly, however, when my marriage broke down. My youngest was still only six, but it turned out that it  hadn't really been the kids stopping me after all. I ended up with a couple of days a week to write when they were at their dad's, plus odd bits of daytime and evening in between. Now one daughter has left home, the next one is at college, and the youngest is taking his GCSEs. What I try to do is write whilst he's studying. We often end up in the Booth's cafe. It's a great place to work!

Have you included any home educated characters in any of your books?

The Dover children in The Summer of Secrets are home educated, though it's not a major part of the narrative.

What's the one thing you want people to know about home education that they may not already know?

Aside from 'yes, they do have a social life'? It's a LOT of fun. When we were finding out about the ancient Egyptians, we mummified a chicken. And you can make ping pong balls jump on the hot air from a  hairdryer, and make a glass disappear in oil. And that would just be a Monday morning!

How do/did you respond to the (dreaded and inevitable) question, "No school today?"

Mostly with big smiles and a chorus of, 'We don't go to school!' Though  occasionally I'd pretend it was half term. 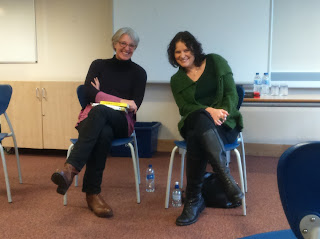 Me and Sarah at a school (of all places!) doing a talk at Banbury Literature Festival in 2015

What are you working on right now?

Many thanks to Sarah for joining me today, it's been an absolute pleasure.