What's in a word?

I published Helen Kitson's second novel, Old Bones, in January. There hasn't been much fanfare, but then it's hard to generate that for any book in these odd times. It's had some fabulous reviews, and, as I type this, the book is currently on tour, with the book bloggers giving the novel a general thumbs-up. It's an unusual novel in that the three central characters are all women in their early sixties. I loved this aspect of the novel and I thought others would too, and they do. All good. However, the blurb on the back of the cover has caused a mild commotion:

Helen takes us back to the fictional Shropshire village of Morevale in this, her brilliant second novel which exposes the fragilities and strengths of three remarkably unremarkable elderly women.

"Sixty isn't elderly!" is something Helen and I have heard from several readers. It got us thinking... to the point where we decided to remove the word from the blurb for future editions of the book... and replace it with... with what? With nothing is certainly an option. But I think we need to reiterate that the novel is about women past middle age. It's an important selling point. The blurb has a job to do, which to entice readers by conveying the premise in a succinct, clear way. (And writing a good blurb is one of the hardest jobs in publishing, let me tell you!) 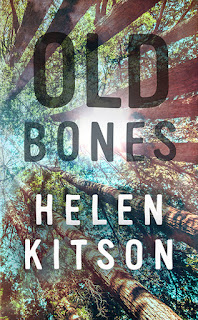 So, we have changed our minds back, and we've decided to stick to the word "elderly". It might be a little controversial, but there's nothing wrong with that...And I've invited Helen onto my blog to talk about our use of the word. Here she is...

"My second novel, Old Bones, focuses on the lives and regrets of three women all over the age of sixty. Unusual, but hardly controversial. More problematic, it seems, is the use of the word “elderly” in the back cover blurb to describe them. The fact that so many people have taken issue with this suggests to me that we still have a problem with the issue of ageing: what does getting old, or older, mean? How do we describe people who fall uncomfortably between “middle age” and “elderly”? What do these words mean, if they mean anything at all?

My “ladies of a certain age” are described as elderly in the blurb because that’s how they see themselves. They feel life has passed them by, that the good bits are over. But is this what elderly means? When we use the word, do we imagine someone whose past is more significant and more interesting than their present or their future? Seated in a café, sixty-year-old Antonia “glances around and notices other women who are perhaps her age or older, yet they seem so much younger. Their clothes are more modern and their faces have a lightness she can’t quite place. These women might have their troubles, but they are not trapped in the past like her and Diana”. She understands that “elderly” is a state of mind rather than anything to do with her actual age, but this throws up another problem, namely how we view the inevitable process of ageing. 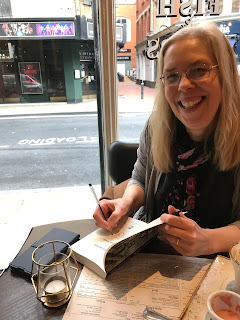 The fact that readers are annoyed, even offended, by the use of the word “elderly” does, perhaps, say something about how we privilege youth over age. Having a young outlook, a youthful appearance: these are seen as positive things. We know, logically, that being old is not in itself a bad thing; that Mary Wesley had her first book for adults published when she was seventy-one; that many people speak of being “happily retired”, retirement giving them time to do all the things they couldn’t do when they were working.

I’m fifty-five and I don’t consider myself to be elderly, but I don’t consider myself to be middle-aged, either. I’m not young, and yes, sometimes that bothers me, though largely for reasons of vanity. There’s a part of me that would like to become poet Jenny Joseph’s old lady who wears purple with a red hat, though even that suggests a kind of desperate bravery: the performance of bravado, a middle finger up to everyone who thinks old people should be neither seen nor heard. 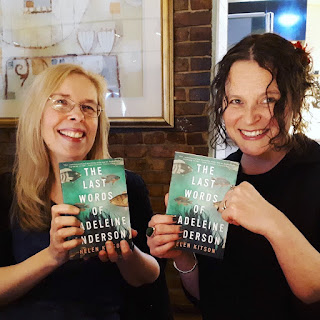 The euphemistic “older” seems to have caught on, at least in America, but is it really a meaningful step forward? Its great appeal, I suppose, is its vagueness – older than what? It seems to me a bit of a cop-out; a bit patronising, even. The fact that my “elderly” ladies have ruffled a few feathers has forced me to look at my own tendency to use the words “youth” and “old age” in, respectively, positive and negative ways.

Turning forty didn’t bother me, and even my fiftieth birthday didn’t faze me unduly. As I approach my fifty-sixth birthday, however, I’m becoming much more conscious of no longer being young, unable even to cling to “middle-aged” as a descriptor for myself. And yes, I would baulk at being described as elderly, because of the images that word conjures up; what sixty-three-year-old Diana describes in Old Bones as “the monotonous grey shuffle towards the final sunset”. Because isn’t that how we view the elderly? In abstract terms we know that, generally speaking, the older you are, the closer you are to that “final sunset”. That is, of course, an uncomfortable thought. A “youthful” fifty-five, I find myself panicking, working out how many more years I can reasonably hope to live, and how many books I can reasonably read (and write) in that time. My world view has changed in the past five years. It’s not so much that I dwell on the past, more that I have a greater sense of having to come to terms with the fact that my life is finite. There are many things I simply no longer have the time to achieve – or not to the extent I would like. If I’m not elderly, I’m certainly not young, and that’s something I simply have to suck up and accept. On the plus side, it means I can let go of things that don’t actually matter that much.

I have more past than future, and there are times when that can feel bleak. On the other hand, I’m far more content with my life now than when I was in my twenties. Even so, age is not just a number, it is freighted with all kinds of thoughts and associations, and expectations. There’s a lot of “50 is the new 40” and so on, but is that helpful? Isn’t it just another way of trying to cling to youth as the ideal state? It’s certainly true that my lifestyle and behaviour are very different from my grandparents’ when they were the age I am now. I don’t think I’m necessarily more youthful (whatever that may mean), simply that expectations of how people should behave at particular ages have changed. And I don’t need to wear purple (with or without a red hat) to prove that I have no intention of conforming to societal expectations of how a woman of my age, of any age, should behave. Because that is really the point of Jenny Joseph’s poem, isn’t it? There is even an actual Red Hat Society inspired by Warning, for “women approaching fifty and beyond”. The existence of this society is telling. I think it says a lot about how society views women, in particular, who are no longer young, and I would suggest this is why readers of Old Bones have found the word “elderly” problematic, because it highlights the fact that there is no satisfactory word (and, in the eyes of many, no real purpose) for women over sixty. That, I would suggest, is something worth thinking about, and something that I hope readers take away from Old Bones."

So much to think about. Big thanks to Helen for writing this piece. We would love to hear your thoughts on this. Feel free to comment below or follow us on Twitter to continue the conversation:

Old Bones was published on 18 January 2021, in paperback and e-book by Louise Walters Books. It will also be published in audio book and large print by W F Howes.