This was one of  my very favourite childhood books: 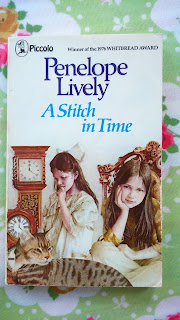 Never did I dream as a child that one day I would meet the author of this wonderful novel, but last night I did just that. I went to Waterstones Piccadilly to attend the Society of Authors "In Conversation" evening  with Philip Pullman and Penelope Lively. I arrived, hot and bothered (it was unexpectedly warm and sunny in London) and who should be just a yard or two from me, also arriving, but Penelope herself. I was struck by how ordinary she looked, which sounds silly, but actually isn't. Writers enjoy a peculiar kind of fame: their names and works might be well known, but their faces, their personages, generally aren't. I've of course seen author photos of her, but photos can be misleading too. Penelope Lively is quite tall, which was unexpected, for some reason. I was struck by her dynamism and carriage - it's hard to believe she is in her eighties now.

Anyway, I took my seat and felt even hotter (the event was packed). The talk began, Penelope and Philip were introduced, and mention was made of their more famous books and the literary prizes they had won. Then Daniel Hahn started asking the questions. (Luckily the authors and Daniel were hooked up to microphones so the audience could hear them above the din of the London traffic).

I noticed some people were taking notes but I decided to just sit and take it all in, and I'm glad I did. Of course now I can't recall all that was said but some things struck me. Both authors had been keen readers as children, which is not at all surprising of course. Penelope, born in Egypt, didn't attend school until she was 12 years old. This fascinated me, as I home educate one of my children and it was illuminating to hear that Penelope essentially taught herself to read (with the help of another girl who was not much older than she was). Her early education consisted of reading and not much else, which was reassuring. In fact I felt quite envious!

At her (eventual) boarding school she and another girl secretly wrote poetry (and tellingly, did not share it with the teachers!)

Penelope came to writing quite late, in her thirties. She told us she simply wondered if she could write, and she gave it a try. I came to writing (or more accurately, publication) late too, my novel being published last year when I was 46. 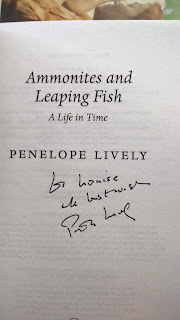 Penelope, and I was delighted to hear this, can write anywhere, and often does. This was also reassuring to hear because I can, and often have to, write anywhere. This was interesting because Philip was the opposite, and prefers to work at his desk with his lucky charms around him. This set me to wondering if a gender difference is at play here: I wonder if women (mothers?) learn to live with the need to be flexible about where and how they write? When you have youngsters to look after it just isn't possible to shut yourself away from them and put in the regulation hours. This seemed to be Penelope's MO and it's certainly mine. Of course Penelope's children are now adults and she did say she used to start writing around half past nine and work until the evening. But less so nowadays, and she doesn't write every day either. Again, all very interesting for me as a writer who struggles to find time. 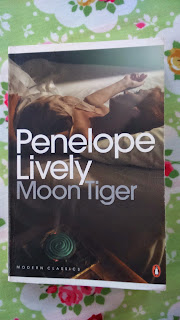 The talk ended all too soon, and then it was signings and wine. I picked up a copy of Penelope's memoir, Ammonites and Leaping Fish and asked her to sign it for me. I was utterly star-struck but determined to tell her how much I enjoyed her work. I told her I was a big fan of Moon Tiger. I wish I could have been a little less inane, but what else can you say? I then produced my own copy and she graciously signed that for me too. 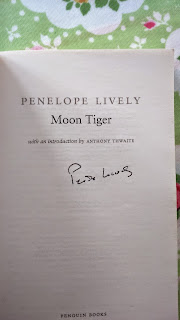 I'll never forget last night and the absolute thrill of being in the presence of Penelope Lively. It was inspirational for me as a writer, a mother, a woman.


NB, Author Rebecca Mascull and I worked together on her blog recently, sharing our collective thoughts about Moon Tiger. It is shamelessly fan girl! - but I hope, interesting to read: