A Life Between Us

I'm thrilled to say I'm kicking off my publicity campaign for my forthcoming novel, A Life Between Us. Today I'm excited (and a little lot nervous) to share with you the prologue.

Quick heads up: A Life Between Us will be published by Matador in February 2017. However, if you fancy an early read, I am arranging for Advanced Review Copies to be printed in September/October. I'm currently putting together a list of readers who would like an ARC, in return for a review. It doesn't have to be a long or beautifully crafted review (although that would be brilliant). On Amazon or Goodreads, just one sentence or even one word will suffice. On Goodreads, simply leaving a star rating is enormously helpful to authors. I'd also be thrilled to do interviews and Q&As on blogs. I'm open to ideas! This novel has been on quite a journey, and there is a story behind the story, I think. I'm always up for talking about my self-publishing decision, and the experience of self-publishing after being traditionally published. 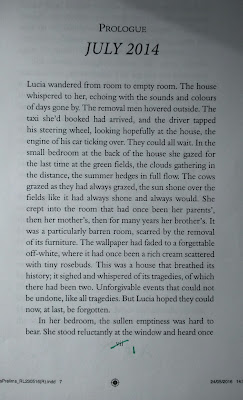 Proofed and good to go...

Please do get in touch on here, on Twitter @LouiseWalters12, or on my Facebook writer's page if you are interested in a review copy. What I won't be doing is sending out unsolicited ARCs... well, maybe one or two... I am mindful that book bloggers and authors tend to get bombarded by books. But please accept this blog post as an invitation. I'd be happy to add you to the list.

A Life Between Us will also be available to request on Netgalley, from around December.

OK,  here's the prologue in full. I do hope you enjoy it.


July 2014
Lucia wandered from room to empty room. The house whispered to her, echoing with the sounds and colours of days gone by. The removal men hovered outside. The taxi she’d booked had arrived, and the driver tapped his steering wheel, looking hopefully at the house, the engine of his car ticking over. They could all wait. In the small bedroom at the back of the house she gazed for the last time at the green fields, the clouds gathering in the distance, the summer hedges in full flow. The cows grazed as they had always grazed, the sun shone over the fields like it had always shone and always would. She crept into the room that had once been her parents’, then her mother’s, then for many years her brother’s. It was a particularly barren room, scarred by the removal of its furniture. The wallpaper had faded to a forgettable off-white, where it had once been a rich cream scattered with tiny rosebuds. This was a house that breathed its history; it sighed and whispered of its tragedies, of which there had been two. Unforgivable events that could not be undone, like all tragedies. But Lucia hoped they could now, at last, be forgotten.
In her bedroom, the sullen emptiness was hard to bear. She stood reluctantly at the window and heard once more, as she always would hear, those plaintive cries: No! Please! Stop! Forgive me! She looked down at the floor beneath the window and there was still the pale pink stain on the floorboards. She’d not managed to clean it completely, despite scrubbing and scrubbing, again and again. No matter. The house wasn’t hers anymore.
She slowly struggled down the steep narrow staircase, her gait awkward. Her leg had not been right for weeks. Since the day Edward— But she would not think of that. She would not think of him again, her handsome brother; the monster he had become, the monster he had in fact always been. She would never see him again. Her mind was set. Never. She would not see any of them: not Simone ‒ especially not Simone ‒ not even Tina. Despite everything, Lucia supposed she was indebted to her niece, and in her dark heart there lurked somewhere a solitary beat of gratitude.
Downstairs, she made sure to leave all the interior doors open. The house could do with an airing. The new owners would no doubt tear the place apart, rip up the carpets downstairs, put in new flooring. There had been talk of an extension and a conservatory. In need of modernisation. There had been a suggestion that all those overgrown plum trees at the top of the garden would need to come out. They blocked the afternoon light. The laurel hedge too, so thick and overgrown… She wondered at the destruction to be wrought upon this, the only home she’d ever known – Lane’s End House. Many years ago her father had proudly chosen the name. Would that also have to be changed?
She pulled the front door to behind her and took her time in locking it. She made her way down the three front steps and walked across the lawn to the gate. She closed it behind her, taking care not to let it clang shut. That would be too much.
She opened the door to her taxi and slowly settled herself into the passenger seat. The removal men climbed into their cab, one of them throwing away the remains of his cigarette with obvious relief. The van’s engine started, loud and raucous. Miss Lucia Thornton fastened her seatbelt and stared resolutely ahead. The van pulled away, the taxi followed, and she did not look back.