I'm in that strange eye of the storm moment in the publishing process: copy edit work done. In fact all edits done. I'm waiting for the book to be typeset, then of course I'll be labouring away on proof reading. Essentially though the writing of A Life Between Us is done. So here I am twiddling my thumbs wondering what to do with myself (metaphorically. I have 101 things to do).

I'd been thinking of attempting a screenplay of Mrs Sinclair's Suitcase for some time. The completion of the novel edits coincided with a bout of tendonitis... I've been more or less laid up for the last couple of weeks. So I got out my index cards, fiddled with scenes, and started writing. Just over a week after starting, I typed "Fade out" and voila - screenplay written. 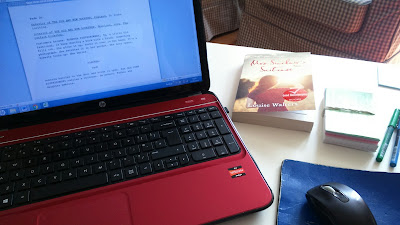 Well, all right, a first draft written. A very rough first draft by a complete amateur who doesn't understand film anywhere near enough. But it doesn't matter. I loved doing it. It was good to re-visit the story and characters. It was fun deciding which characters and events could be dispensed with... and actually, those decisions were made quickly and easily as it seemed obvious. It was fun to write new dialogue and new scenes. It was fun to use dialogue from the novel too. 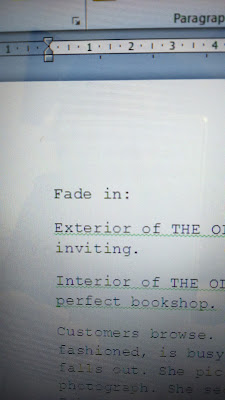 I don't fully understand the conventions of a screenplay and I typed it in Word, replicating as best I could the screenplay formatting. I'm not worried about these things right now. I just wanted to concentrate on the writing at this stage and get that first draft down. Now I've lots of material (108 pages) to work on and shape into something that looks vaguely professional. 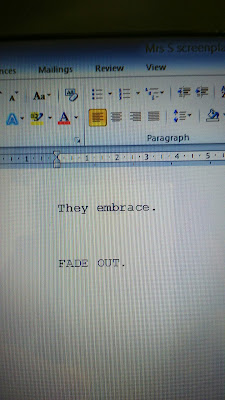 Now I've started I'm going to keep at it and maybe workshop the script or get it critiqued (once it's ready). While I love writing novels, it is exhilarating to try something else. Screenplays are a challenge to a novelist because there is no introspection... everything a character feels has to be conveyed through action and dialogue. There are no internal monologues or long passages of thoughts. It's a whole different ballgame. I actually think it's a useful exercise - looking at our story and characters in a new light, having to approach the writing in a purely visual way. If nothing else it's given me a new dimension, a new way of looking at my stories. I'd recommend it as an exercise especially if your project is ailing and in need of a fresh approach. I think you'll be thrilled with what is revealed and what you can do with it.

I also entered a short story competition, polishing up a story I wrote last year. No hope of getting anywhere, but again it was good to craft at this story and see where I could go with it. I think it's the best I've written so far. I'm not very good at shorts but I do want to learn. I love the brevity.

Hopefully there will be more A Life Between Us news soon!