I'm still in the thick of copy edits. I love this part of the writing/editing/publishing experience. Although, it can be tedious when you're trying to concentrate after a busy day with the home educated kids, the school runs for the school educated kid, laundry, cooking, etc. I confess to only managing an hour or so of useful editing before my eyes glaze over. I am so glad I made the decision not to rush to bring out A Life Between Us...

Author Ros Barber caused a bit of a stir this week with her Guardian piece in which she explained why she would not self-publish her literary work. Self-publishers took serious umbrage! And I don't entirely blame them (us). At the same time I think Ros made some valid points. I won't bang on about it here, as others have voiced their feelings far more eloquently than I ever could, such as Jane Davis's response on her blog yesterday.

I do want to briefly discuss Ros's analogy of a cabinet. She rightly says that you wouldn't just have a go at making a cabinet and then expect to sell it. No, you wouldn't. But a cabinet is a cabinet. Skilled joinery is universally recognisable. It's a specific skill. Bad joinery is as obvious as good joinery. In other words, it's objective.

Writing is subjective. Once you get past the nuts and bolts (sorry!) of spelling, grammar, punctuation, syntax and the ability to tell a story, all that's left is taste. You only have to look at any book listed on Amazon or Goodreads to see the variety of reviews, the diversity of responses to any given novel. The serious self-publisher (there is such a thing) engages with their inner critic, and gets help with their writing. They craft their work, as does the serious cabinet maker, and they won't unleash on the world anything that is below standard. I know that's not how all self-published authors operate, but I think it's true of many. Novels are not cabinets. 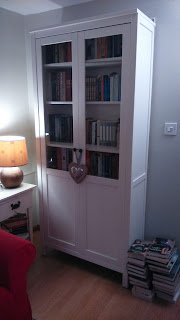 My books in my cabinet. A rather cheap, mass-produced piece of furniture, but it does the job, and lots of people love this kind of cabinet.

Let's also remember some of the stuff that traditional publishers present to the world... among loads of fantastic books (this week I read My Name is Lucy Barton by Elizabeth Strout and oh my goodness, how good is that...) there are some truly awful novels and self-publishers can't be blamed for those, that's for sure. Some of these books are hyped on Twitter and elsewhere, sometimes to an irritating level. It seems if a book publicist is constantly banging on about a book, that's OK, but if a self-publisher does the same, it's unprofessional. I would argue it is, but then isn't the pushy publicist also being unprofessional? Or just doing her job?

I don't know. I'm just doing what I do, to the best of my ability. I really don't enjoy the "them and us" attitude that seems to prevail in discussions about trad "versus" self-publishing. There are many hybrid authors around, and I'm proud to say I'm one of them. To me it's an adventure - all of it, writing, editing, publishing (trad, assisted or self) - and I try not to take it all so seriously. It's a plural world, and that's a good thing.