New challenges and a giveaway

I haven't blogged for so long, but I have plenty of excuses!

It's been an amazing summer, finally seeing Mrs Sinclair published in paperback and eagerly checking my ranking and reviews on Amazon every few minutes! I've had some lovely reviews and a couple not so lovely :-) I'm learning to accept the bad reviews, after all everybody is entitled to their opinion, and entitled to give it. You invite all the criticism once your work is out there, so I'm being philosophical about all the reviews.

I've had two foreign editions sent through to me, the Norwegian and the Dutch, both with beautiful covers, I think. I have a spare Dutch paperback, so if anybody would like one, or knows somebody who would like one, please get in touch. 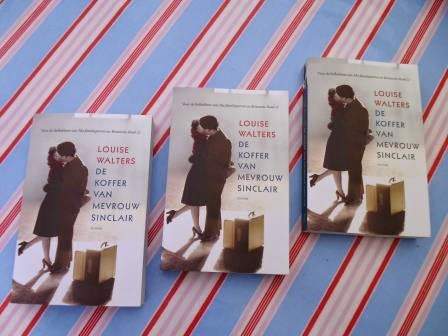 I'm working hard on another novel. I'm fine tuning it and hoping to send it to my agent soon. I had a bit of a setback over the summer, but if there's one thing you need as a writer, it is self-belief, preferably in bucket loads. Mine is only slightly depleted... well, quite depleted... OK, depleted... but I haven't lost that little inner core inside of me that says, don't give up, keep going, you've worked hard and you will have to work harder. It's a good feeling, an affirmation from me, to me, that I need to just keep going with this project. Writing is a funny old thing - each piece of work brings its own challenges and set of rules and expectations. Right now I'm giving it all I've got...

... which brings me to my biggest news, which is that I'm now a home schooler/home educator, whichever term  you prefer. One of my sons has been struggling in school for far too long and finally we decided to try not going to school. I have been so worried about finding the time to write... and I was so looking forward to September when I was going to have all the children in school and five days - five whole days! - to crack on with my writing. Of course, that's no longer the case, but do you know what, it doesn't matter a jot. I'm still finding the time to write, and I managed Mrs Sinclair with a baby in one hand and a pen/keyboard in the other. So I know it can be done... and I'm doing it. And my son is much happier, which makes me smile, and I wouldn't have it any other way.

Rambles over, good luck with whatever challenges you're facing at the moment