Today I'd like to welcome my friend and fellow author Rebecca Mascull to my blog. Rebecca's second novel, Song of the Seamaid is published tomorrow.


First things first - What is Song of the Sea Maid about?

It's the story of an C18th orphan girl, Dawnay Price, who is lucky enough to find a benefactor and is educated as a scientist. She defies the conventions of her day and travels abroad to further her studies. And there, she makes a remarkable discovery...It's set in London, Portugal and the Mediterranean and explores science, feminism, education, orphanages, the age of sail, the natural world, war and belief, as well as being a love story. So I hope it's got something for lots of different kinds of readers.

This is your second novel. Did you suffer from Second Novel Syndrome?

I did and I didn't! I was nervous about starting it, as I was convinced I couldn't write anything better than the last book. But I wrote 3 novels before my first published one - THE VISITORS - and I thought that every time! So, I'm used to it. But once I got started, I realised I just had to put that fear behind me and invest in the new story and in Dawnay. She was such a strong presence for me early on and I felt as if she took me by the hand and said, Come on! I think her resolve was partly my resolve to write again and be fearless. Once I started writing, I enjoyed myself tremendously and was quite bereft when I'd finished. I wanted to stay there!

I wrote about the 'difficult second novel' thing here - it sums up my feelings quite well, including fear and nausea! 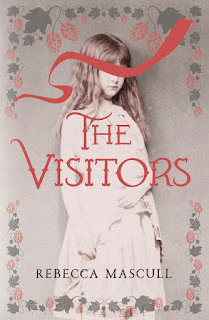 You do a lot of research. Which process do you prefer - the research or the actual writing?
That's a good question and my answer is - both! I love those early glimmerings, when the novel is starting to crystallise and that's when the research can drive the story. That's a very exciting stage and it feels open to all possibilities, an open road. Yet, there's also tremendous satisfaction when it starts to coalesce and I get a synopsis done, which I always do. And once that's done and a chapter plan, and I sit down to actually write the thing, that's where the hard work really starts for me: the drafting stage. I write quickly and scrappily and fill in gaps later. So my first draft takes a heck of a lot of mental energy. I feel like I'm holding my breath the whole way through. I don't want to spoil the magic and screw it up. In some senses, I'm glad when I finish the first draft, but I'm also very, very sad, as I know I'll never be in that first rush of creation with that story again, and the rest will just be pruning. It's a little like first love! That breathless rush and obsession with it, always thinking of it. But then, as a novelist with many more stories to tell, I get to have first love again each time I start a new story! I love my job in that way.

So far you've published historical fiction. Do you have any plans to publish a contemporary novel?

In general, I have to say that the modern world in fiction does rather bore me. I've tried to analyse this many times, as I am very interested in the modern world itself and watch the news every day and love keeping up with current events. Maybe it's to do with the fact that my favourite thing about fiction is the escapism of it, in getting away from my own current existence and inhabiting someone else's shoes. With that as my aim, I don't generally want to be in the modern world when I'm trying to escape it (if that makes sense!) Having said that, there are some books about modern life that absolutely grabbed me, like 'Where d'you go, Bernadette?' which I just adored. And that was bang up to date and completely absorbed me. But generally in my reading, and certainly in my own fiction, I want to imagine another world - and the past is that for me. But I'd never say never, and who knows? I might write about contemporary England one day. But no plans at the present!

One of my favourite questions: who are your literary influences? Which writers or books could you not live without?

Oh gosh, that is such a hard question to answer, as you always want to come back and revise it! But I'd say my main influences are so disparate and unrelated, that there is very little pattern to it. I just stumble across books and writers I love, almost always by random accident. And it takes a rare writer for me to love all of their books. I love Margaret Atwood's historical or contemporary fiction, but I don't find her speculative fiction as compelling, as brilliantly written as it is. I love Charles Dickens, actually I quite worship him! But I didn't take to The Pickwick Papers at all and much prefer the darker books, like Great Expectations.

Other writers who've influenced me are Annie Proulx, just in the sheer range and guts of a book like Accordian Crimes. Elizabeth Jane Howard is a recent discovery, and I fell head-first into her 5 Cazalet novels and came up about 3 months later bereft at having finished them all. It's too fresh for me to really understand how she did it, but I will be rereading and analysing it for years to try and work it out, believe me! And my most recent, breathtaking discovery was Moon Tiger by Penelope Lively, which you and I read together, of course - one of your favourites! (We wrote about it here)

(LW: one of my favourites indeed. It may even be my favourite now - is Jane Eyre finally toppled?)

The verve and honesty of it, and the messing about with perspective - this really made me feel I needed to just be brave and say, Stuff it, I'm gonna write this story however the bloody well I like. As that's what Lively did in that book. And that really inspired me. I wrote about my reading influences on my website here.

Do you have any advice for as yet unpublished writers?
Well, there is no easy answer. It's a bloody minefield, this writing business. If you write novels and your aim is to be published, you have to accept that it is not going to be easy. It could take years - decades even - or never happen. It's about perseverance, self-belief and very hard work. There might be a modicum of luck in there somewhere too - but if someone says to a published novelist - You're so lucky - they've missed the point, I think. It wasn't luck that made that writer slog away for years honing their craft. For most writers I know, it's been a road of trials in one way or another. But all of that sounds rather negative, and I don't want to put people off! I'm just being honest. I've had a lot of disappointment along the way, and it's made me a stronger person and a better writer - I don't regret a moment of it. I adore my job and I am pretty grumpy doing any other form of work, to be honest! So it was all worth it.  But what I'd like to leave any aspiring writers with is this: KEEP GOING. There will be a thousand reasons to give up, but you mustn't let the bastards get you down. Keep writing from your heart, read great writers and improve your work constantly. Never be satisfied with sloppy, lazy writing and never stop working hard.  If you get enough signs from the world that what you're doing is good, and if you keep working hard, you'll get there.

Thank you Rebecca for your insights, not to mention some great reading recommendations. Those Cazalet novels are calling to me... and good luck with Song of the Seamaid.

Rebecca lives by the sea in the east of England with her partner Simon, their daughter Poppy and cat Tink. She has worked in education and has a Masters in Writing. She is also a member of The Prime Writers, a support group for those writers who commercially/traditionally published their first novel aged 40+.
Posted by Louise at 08:00