How I found my first author (hint: enter writing competitions!)

It's been so long since I posted but I have an excuse: I've signed my first author for Louise Walters Books. She is Laura Laakso and we have signed a one book deal for her debut novel, Fallible Justice; which is the first story in Laura's paranormal detective series Wilde Investigations. 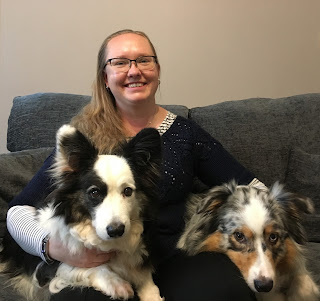 Laura and her dogs

I first became of Laura's work while reading for the 2017 Retreat West First Chapter Competition. Amanda Saint, who runs Retreat West asked me if I would help her read, and I jumped at the chance. She duly sent the stories through to me, and I started to read through them (I wrote a blog post about it here).

I was bowled over by one of the chapters in particular (well, actually two of them were spectacular) but I was also confused by it. Was it brilliant or was it bo****ks? I just couldn't tell. So I asked Amanda this very question and she said it was brilliant. So we put it through to the long list. Then we put it through to the short list. Then it was picked as one of two runners up in the competition. By this time identities of the authors were revealed and two things struck me: I rather wistfully thought how great it would be to get a submission like Fallible Justice for the imprint I was then forming; and what a brilliant writer's name: Laura Laakso. It's a writerly name if ever I heard one.

Fast forward a few months: My imprint was up and running, my boiler-plate contract drafted (that took hours of my life, I can tell you) and I was receiving submissions. One day a submission from Laura appeared in my inbox. I was thrilled but didn't want to get too excited. I read the submission and decided it wasn't right for me. So I turned it down, while asking to see the whole of Fallible Justice instead. Laura sent that through to me, I got it onto my Kindle before you could say #amwriting and I read it. Then I read it again, just to be sure. When I offered to publish it, I did point out to Laura that she could (should!) consider trying the agent-bigger publisher route. I feel her work is more than good enough to warrant attention from bigger players. Laura surprised and thrilled me by saying she preferred to work with a smaller outfit.

The Society of Authors vetted our author agreement, and then Laura and I signed it early in November. I still can't believe I'm working with such a talented author from the very beginning of my publishing adventure. And I really can't wait to publish Laura's work. She deserves to garner an army of loyal fans and I will work my socks off to make that happen. It's going to be an exciting year.

Fallible Justice by Laura Laakso will be published by Louise Walters Books on 8th November 2018, in paperback and e-book.