The Proof of the Pudding...

My fully typeset novel was sent through last week. Cue some frenetic printing, panic, cold sweating and anxious reading. This is pretty much my novel, exactly as it will appear in the book. Too late for major changes or re-writes.

And it's OK. I've gone through it once, sticking in numerous Post-its, but the changes are minimal (despite appearances). I've spotted a few repetitions that didn't show up in the Word doc... a few of my word choices weren't great and I've thought of better ones... a few type-setting typos. I'm doing my fair share of obsessive checking and checking again that I've only used song titles and not lyrics... checking my usage of brand names and changing a couple to generic names just in case. But essentially, this novel is good to go. I'm impressed by the standard of the typesetting which has made the proof reading job that much easier. 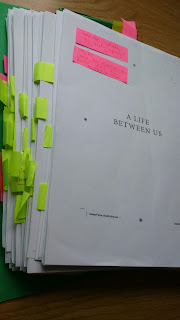 Next step: I'm waiting for a professional proof reader to send me their marked up hard copy. Then I need to collate all the mistakes spotted and changes needed and send one copy back to my publisher Matador. The changes will be made, then that corrected copy will be returned to me for a second proof-read. I'm at that stage of the publishing process that feels never-ending, but it is essential to ensure my book will appear exactly as I want it to appear. Nervous times, but fun times.

I subscribe to The Bookseller and an article in last week's edition caught my eye. It talked about the effect self-published e-books are having on traditional publishers. Only it used the word "threat" rather than effect, and I find this quite astonishing and rather sad. Traditional publishing seems to want to take the moral high ground, playing their part in the creation of the "them and us" attitude, which is unhealthy and divisive. It doesn't need to be like this, really it doesn't. Especially when you consider most readers don't check, care or know who the publishers are of the books they buy or borrow. Many readers aren't certain who pays for publishing a book; and guess what? They don't care about that either. Before I became a published author none of these considerations crossed my mind.

Elsewhere in The Bookseller there is talk of the role traditional publishers play in curating books. Well, OK. But this kind of assumes that trad publishers bring out only the finest work by the finest writers... which is not always the case, as we all know (although very often it is). It also assumes that self-publishers don't somehow "curate" their own work. Doubtless this is true of many, but not all. I'm taking a great deal of care and pride in bringing out my self-published novel and I've worked my arse off on it, and will continue to for months to come. The broad stroke dismissal of self-publishing as non-curated garbage "threatening" traditional publishing needs to cease. I get mightily fed up of the bad feeling and endless carping between trad and self-publishing. There is so much disrespect on both "sides" and there shouldn't be. In fact, I think it's damaging to all of publishing and probably needs to stop forthwith.

One day traditional and self-publishing will team up, or at least shuffle along the bench and make room for each other. Can that be soon, please?

I've heard a rumour that my mocked up cover will be ready for me to see very soon. Actually there will be three, as I'm having problems deciding which image will work best. There is so much to consider...

Until next time xx