On Monday 23 November I'll be publishing In the Sweep of the Bay by Cath Barton. At 22,000 words it's my shortest title yet. (A novel is usually around 70-100,000 words.) This is my second novella at Louise Walters Books: in September 2019 I published Diana Cambridge's Don't Think a Single Thought... longer than Cath's book, at 42,000 words, but still a novella. 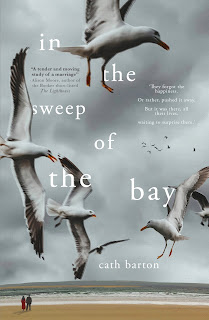 I love short novels - which is what these two stories are, in my opinion. Novella is a slightly troubling term. To me it suggests insubstantiality or frivolity. Neither of these books could be described in those terms.

There is no room for waffle in a short novel. No room for writerly self-indulgence. You just have to tell the story briskly, efficiently, and neatly. Short novels are refreshing, and in these troubled times, brilliant for readers who are struggling to concentrate. Short novels are light (but not lightweight) and I for one feel a great sense of satisfaction when I've finished reading one. 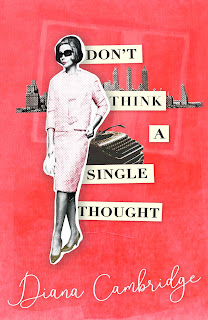 It takes great skill to write a big story in a small number of words. Everything has to work so much harder for the writer. It's a bit like a drum kit - my brother who once drummed in a group explained this to me: the smaller the kit, the harder the drummer has to work, and therefore the more skills she has to develop. Writing a novel is the same: I reckon a lot of writers can write a big blowsy scene over a dozen pages, full of overblown description and imagery. But it takes a special writer, a very talented writer, to write that same scene in a sentence or two. Writers love words, we love slinging them down on the page in their thousands. The writers of short novels have a lot of discipline; making the job of editing them a particular joy. 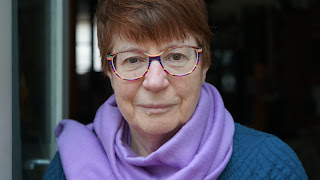 In the Sweep of the Bay was just 7,000 words when Cath approached me about it last year. I loved the writing and I was drawn to the central character, Ted Marshall. I gave Cath some editorial notes and ideas, and she went away and expanded the story, and then sent it over again. I loved it; still loved Ted (and had been thinking about him a lot in the meantime); and I was thrilled to offer Cath a publishing deal. We worked on edits together over several months, changing the order of chapters around (Cath's idea) and generally polishing the story to make it as sharp and clear as we possibly could. The opening chapter, in the first person viewpoint of a street cleaner (who takes great pride in keeping the statue of Eric Morecambe in pristine condition), wasn't at the beginning in earlier drafts. I think it was a fab decision on Cath's part to open the novel with that voice. It sets the tone for the whole story and allows the reader "in". Perfect!

Why do I like the central character Ted so much? I think it's because he's a good man. No grand gestures, no big heroic moments, no shoddy behaviour; he's just a good, honest bloke. I love Ted, and his wife Rene, also utterly "ordinary". I had a hunch readers would fall for these two and it seems they have. The response to In the Sweep of the Bay has been overwhelmingly positive so far.

"Ted had not had choices. Not when he was young. Leaving school at fifteen and starting work in the family firm had always been a certainty. He hadn’t questioned it, any more than he’d questioned day following night. He’d done his apprenticeship like everyone else. It made no difference that he was a member of the family, he needed to learn the same as others did. His Aunt Lavinia was the head of the firm in the fifties. She was respected by the workers as much as any man. They’d started him on sugar-basins. The feel of the clay slipping under his fingers on the wheel had quickly become second nature to him. He had, his Aunt Lavinia used to say proudly, the Family Feel.

Three years’ apprenticeship and Ted moved to the painting benches. This was long before he designed the first Edward Marshall vase, of course, but it was clear to his workmates from the start that painting was to be his métier. Ted was happy. He spent his evenings listening to plays on the radio as he experimented with new designs for the factory. Except on Fridays. Friday night was music night on the Light Programme and Ted tapped his feet to the big bands as he worked."

Let's talk dosh! A very real part of the appeal of a short novel to me as a tiny indie publisher is the cost. Short novels are more affordable to edit, typeset, print, and post. I've a real chance of breaking even on my short novels (haven't yet, but I think I will in the end). My future plans as an indie publisher are uncertain but continuing as a publisher is my aim and I will always look favourably (but not exclusively) on the shorter novel.

The downsides to publishing a short novel? Well, we couldn't get an audio deal (a minimum of 60,000 words is the preference) so we have had to DIY the audio books. These are digital-only and their production creates extra work for both publisher and author. The plus side is we get to choose and work closely with the audio book narrator. (Publishing is always swings and roundabouts...) But really there are no downsides. It's been a delight to work on this story with Cath. We hope you enjoy the finished book!

In the Sweep of the Bay can be ordered from any bookshop (Waterstones in Abergavenny have it in stock!) and it's available in paperback and e-book from all the usual Internet retailers. Signed copies with co-ordinating postcards are available from my website bookshop: 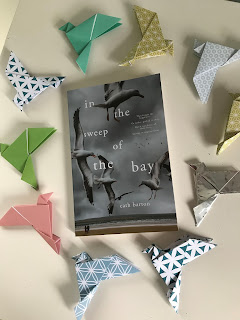