The Road to California extract

I'm kicking off my promo of my third novel today! It's up on my website for pre-order here and the manuscript is currently being converted into an e-book. Once that has been completed I will put the e-book up for pre-order on Amazon and elsewhere. 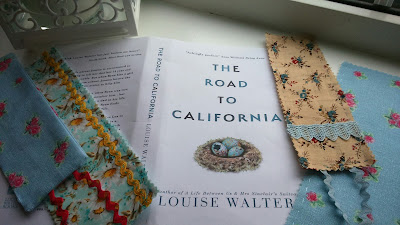 All copies sold via my website bookshop will be postage-free; they will be signed and be sent with a handmade fabric bookmark.

So, I am delighted to share with you today an extract from The Road to California. This passage is our first introduction to my character Joanna, and her work... my fabric bookmarks are a homage to Joanna really, and I think she would heartily approve! Joanna is a single parent to her troubled teenage son, Ryan. She's principled, dynamic, caring and creative. She can be a little too "earnest" in sharing her principles, at times. But I love her! Hope you do too...


‘How much for this?’
She breathed in the familiar scents of history and age and storage. She crumpled the fabric and buried her nose in it, as she always did with fabric new to her. It was rarely brand new, of course. She only used new fabric as a last resort. This was one of the tenets of her business. She took great pride in using the used, a characteristic of almost all her work. Road to California: her business, her life, her living. Reusing, reclaiming, recycling, upcycling: whatever you wanted to call it — it was what she did. She looked carefully at this latest find, enjoying the funky clash of orange, purple, and green, in dreamy psychedelic swirls, pseudo-flowers, clouds, a strange repeated pattern with a fluid figure that might be a fairy, a girl, a woman. And was it silk? Nylon? She wasn’t sure. The fabric smelled of tobacco, but that only added to its charm.
‘It’s a nice big bolt,’ said the beer-gutted stall holder. Bob, she thought. He was a softie behind the gruff exterior. And the most unlikely person she could conceive of to be running a vintage fabric stall. ‘A good five yards, I reckon. Genuine seventies, that is. Twenty quid?’ Bob took a long, thoughtful drag on his cigarette. Joanna effected not to notice. But it smelled good.
She tried to get to the market most weeks, to pick up interesting finds. She had wanted to get out this morning, for an hour or two, just to get away from the sewing machines (she had two, plus an ancient Singer). She loved her work, but it was important to be healthy about it; and besides, new-to-her fabrics always inspired fresh ideas, exciting new projects. Her business thrived on it, and so did she. So these jaunts to the market were not a waste of time. They were essential.
‘It certainly looks to be genuine seventies, doesn’t it?’ said Joanna, in her husky voice. She narrowed her eyes. ‘I’ll give you ten quid. How’s that?’
Bob looked at her. She knew he remembered her, although they had never engaged in chit-chat. People did tend to remember her. She knew her bright green eyes and wild blond curls were striking.
‘Fifteen?’ he said. ‘But I’m giving it to you.’
‘You can’t find your way to ten? I do come here practically every week.’
Bob raised his eyes to the sky and gave a little nod. He took another drag on his cigarette. The smoke drifted towards her.
She smiled and flourished a crisp note. Bob took it. He didn’t offer her a bag, but she didn’t need one. She had enough bags of her own.
‘Thanks so much,’ she said. ‘I’ll see you next week.’ She checked her watch. There was enough time for a quick pit stop. She’d go to her favourite coffee shop, a small, independent outfit that sold no-nonsense coffee and tea in pretty vintage teacups with pot luck saucers, accompanied by a vast array of homemade cakes and biscuits.


As she turned from taciturn Bob and his wonderful stall, her mobile phone rang. She rummaged around for it in her handbag. She saw the caller ID and her heart didn’t know whether to leap into her mouth or sink down into her toes. So it did both, in rapid succession, and she felt sick. There would be no coffee, no homemade cake today. Oh, no, no, no, not again. What now? What now?